Motivating employees remains a relevant and intricate topic many leaders deal with on a daily basis. Employees perform best if they are intrinsically motivated, which means they are interested in the task at hand, and can engross themselves in it. Most companies traditionally use extrinsic motivation factors such as incentives and rewards to stimulate performance, however this creates a gap between what is assumed to motivated staff and their actual needs.

The common factor is that both individuals and companies want to be productive.

Companies are doing their best, but perhaps not enough, to understand what motivates people, with the knowledge that people relate differently to certain stimuli. Then the question of how to motivate people arises, be it through rewards, incentives, praise or feedback. The conscientious manager and leader has most likely read books, done courses, browsed the internet, or experimented with the theories and models that have been developed, without finding one which is the ideal magic fit. This will have made them realise that every theory has an argument for and against it, and reason why it could not work in their team.

Let’s look at a brief historical synopsis of motivation; starting with the ancient Greek philosophers and weaving through the more recent development until the present day.

The Greeks believed that motivation was a hedonic philosophy where we behave in a certain way to forego pain or increase pleasure. In the current world, we refer to this as instant gratification where we either buy or consume things to get an immediate but short-lived feeling of joy, pleasure and happiness. Later, scientists believed motivation to be instinct driven meaning that it’s in our natural DNA to be motivated and pursue goals. Other researchers regarded motivation as reward-based, where our past experiences reinforce our current behaviours. This often arises from our upbringing and previous encounters with motivation which develops our motivational patterns and beliefs. In addition, our social and cultural environment influences our motivation as we want to fit in and follow the trend of other people’s positive behaviour.

There is some truth in each of the arguments as to what motivates a person while also highlighting the complexity of motivation. However, all the above theories focus on the individual and not on the company and how its infrastructure could potentially enhance and encourage an employee to be more motivated in their work.

Maslow’s Needs Theory requires little introduction and is the most popular amongst the many management and business motivation theories. Maslow, being a motivational content visionary, was searching for basic factors that explain human behaviour as well as what makes a person take action to accomplish goals. The principle of Maslow’s Needs Theory is based on three factors:

The Needs Theory is tailored for an individual to satisfy their needs; starting with the basic physical needs and moving up the pyramid until the self-actualisation level.

But what happens if we move from an individual level and overlay Maslow’s Needs Theory into an organisational setting? Would the physical level have to be fulfilled first before we can progress an employee’s motivation to the next level?

Let’s explore what Maslow’s Needs Theory would look like in the life of an employee: 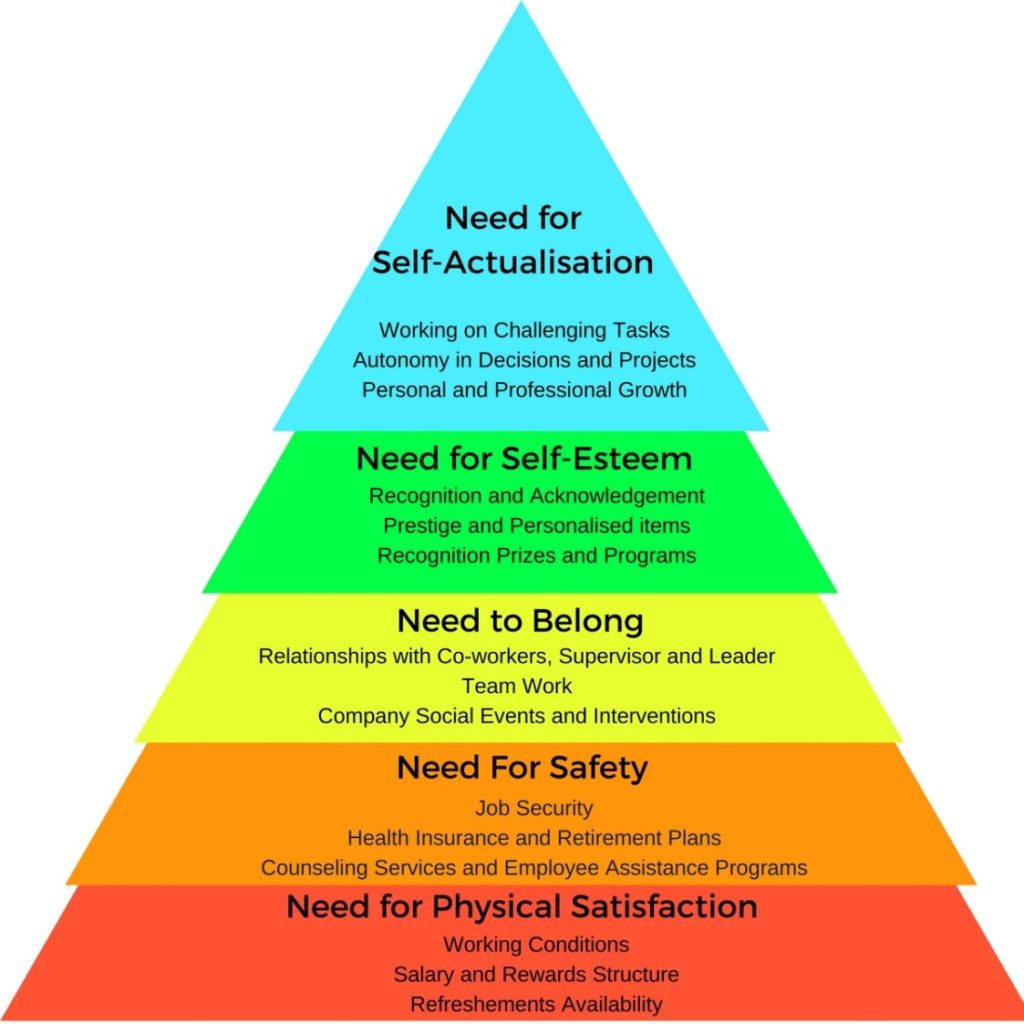 Are companies and employees perhaps out of alignment, where the company is focusing on a higher motivation level, with employees’ basic motivation needs not being met? Could this concept be a way forward for leaders and managers to determine what matters to an employee, and ensure that the basic motivation level is met, to shift the employee upwards from there? It may sound far-fetched, but it may close the current motivation gap and provide management with an applied tool with which to experiment.