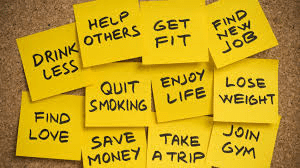 We are constantly being bombarded by the media and social networks with tips and advice for making New Year’s resolutions. You can’t open any social media platform these days without seeing recommendations on goal setting, planning, resolutions, statistics and self-improvement advice. The suggestions are endless… “try this, stop that, and change this…”, and the list goes on!

Research shows that more than half of the population do not make New Year’s resolutions. I’d like to know how that figure can be true if we look at the information flood in the media? Also, a meagre eight percent of people successfully accomplish their resolutions. The generation who are under 30 seem to be the most successful with thirty-seven percent of them who are successful with their resolutions. With such a low success rate, I find it hard to believe that we still continue with this “mindless” tradition.

Let me transgress for a moment and explore the origin of this tradition. New Year’s resolutions date back 4000 years to the ancient time of the Babylonians who celebrated New Year for three months from January to March. During this time, the Babylonians promised their Gods that they would dutifully repay their debts and return borrowed objects to their rightful owners. These intended gestures were so that the Gods could bestow blessings and good fortune onto the people. Fast forward to the 21st century and this religious tradition has shifted to us making promises to ourselves on self-improvement and development.

Studies have shown that self-improvement focuses on four main topics. Forty one percent of people resolve to enhance their personal development and education, followed on the heels by forty percent promising to improve their money matters. Then there are thirty-four percent who focus on health and weight topics and twenty-two percent on cultivating healthier relationships.

Also, the origin of the word “resolution” stems from the 14th century Anglo-French and Latin language and directly translated means “to break down into small parts”. Taking the lead from this definition, it provides a possible answer as to why by the end of January our positive intentions have petered out and lost energy.

Perhaps the answer lies in our mindset thinking? Our New Year’s resolutions might be hairy, audacious goals that we truly want to achieve, but with an unrealistic timeframe. It took us time to master our existing habits, and obviously, they cannot be undone in 10, 30 or even 90 days. We consciously, or sub-consciously perhaps, repeated the negative habit on a very regular basis, which allowed pathways to be developed in our brain. If we look at neuroscience, the evidence suggests that neurons that fire together wire together. To replace negative with positive wiring, we must undergo two simultaneous processes. Firstly, we must stop thinking and doing the negative stuff so that with time the neuropathways starve and die-off. At the same time, we should very diligently and regularly engage in new positive behaviour to get new pathways connecting with each other. This process of the new neurons starting to fire together can take anything from ninety days to six months, depending on the conscious regularity. Only after six to nine months does the new positive habit become automated and part of our natural behaviour.

A second reason for the high New Year’s resolution failure rate is that we are not crystal clear of the underlying reason, the WHY, for the desired change. The WHY factor is a very important and often overlooked component and is the motivation driver that keeps us focused and committed when we have wobbles, self-doubt, exhaustion or feel overwhelmed. Start with understanding the WHY for the New Year’s resolution. Write down reasons and benefits WHY you want to pursue change.

There is nothing wrong with wanting to change for the better and setting resolutions, however it’s a mindset to keep throughout the year. Going back to the Latin origin of the word “resolution” (break into small parts) we should consider breaking down our resolutions into monthly ones. At the end of every month we should take stock of the progress made, the learning experienced and then celebrate our wins. It’s important to do all three of these elements every time.

New Year’s resolutions are positive intentions and promises for our own self-betterment and improvement, so let’s move the success ratio upwards.